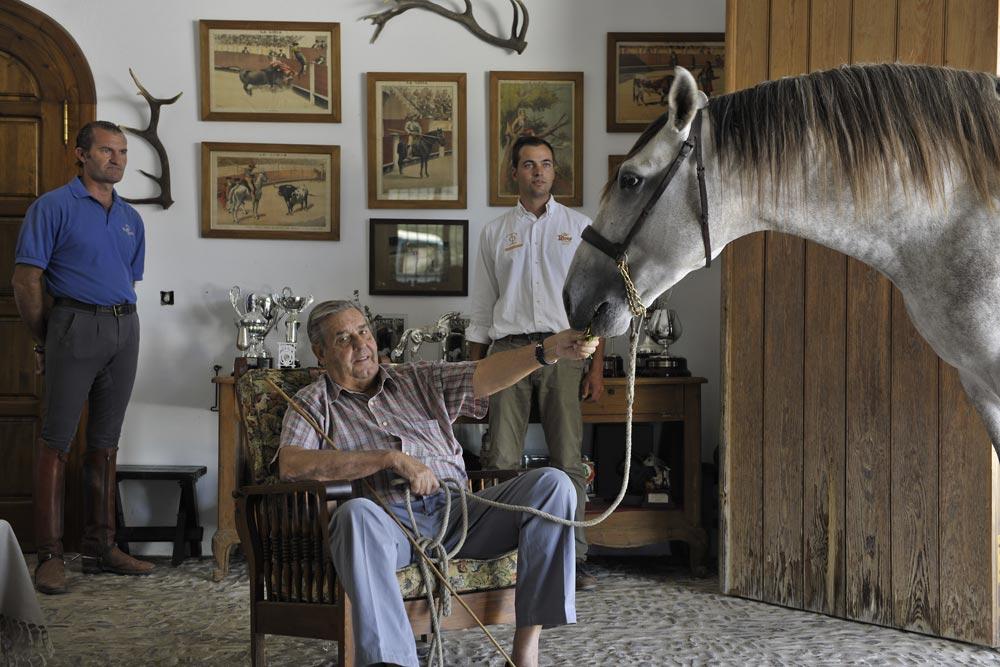 On our last day we visit the reknown Yeguada Tomás Osborne, in Los Barrios, in the Cadiz province. We finally arrive at the gate of the ranch Las Navas de Gibraltar and from there we start driving up a dirt road, the mares are free in the pastures and are eating a few meter away from our car, undisturbed by our passage. As we climb up we are met by the house ride Chema Martínez and the mayoral’s assistant Luís Perea. They stop and welcome us, instructing us to take photos of the females first and then the foals before going up to the facilities.
The first thing we notice is that the horses are beautiful. The mares (at the time, in 1980, very few) and the Osborne brand where ceded to the current owner Augusto Romero Haupold, by the same Tomás Osborne, his friend and founder of the farm. Augusto is a funny man, since the beginning he speaks to us as we were part of the team, he exclaims “I’m not very much into formality!”

Mares eat in the pasture, they're not annoyed by the car passing

Mares walk free in the fields

Augusto Romero Haupold's mares are left free in the pastures all year around.

Buildings and a perfect lawn.

Buildings with a cloudy sky behind

Mayoral's assistant Luís Perea in the foals' track with Victorioso

One of the 3 tracks in the farm.

The stables for the older foals.

A young female foal in the track, around her only mountains.

Very young foals in their corrals.

The courtyard, the house and the well.

Lounge with fireplace in the house.

From those few horses, today Augusto’s farm counts 100 heads, between male and females. However horse breeding is not Augusto’s primary activity, with his family he manages a liquor distillery. The typical and well organized facility belonged for over 300 years to the Duchess of Osuna, Romero tells us that he took 10 years to find the right place, but when he found this place, he immediately understood its potential: immense pastures and on top the patron house, from where you can check everything.
Augusto has 5 collaborators, along with Chema and Luís there are: José Mari Rojas, the mayoral, José Salazar, the guardian and Katy Rizo, his wife, who takes care of the house. Romero is the son of a veterinarian, since he was a child he has always been surrounded by animals, his family also breeds cattle for meat, he has deep knowledge of the job. In his horses Augusto looks for nobility, strength, beauty and finally, aptitude to taming, he explains “morphology is important, but if I have a beautiful animal who’s not noble, it serve no purpose”.

Mares in the pasture

Foals at the manger

Foal poses for the photographer

Faraon RH in the track

Soleado RH on the rope with stableboy Luís Perea

His brand is well known, but he doesn’t deny that the market today is very difficult, he attributed the decrease in sale to the economic crisis, that at the same time has seen an increase in animals’ support costs; luckily he can almost enitrely self-produce the horses’ food also because of his breeding philosophy, the males are left to run free in the fields until they’re 3 years of age, while mare are left to wander in the pasture for their entire life, he affirms “the development of each specimen must be done with the correct timing, when they’re free to run and move without limitations, the bones, muscles and tendons shape well and horses grow properly”. August is a nice man, we understand this by the smiles of all his employees, by the relaxed work environment and by how the joke together, they all seem to be part of a big family.

History of a surname: Baones.