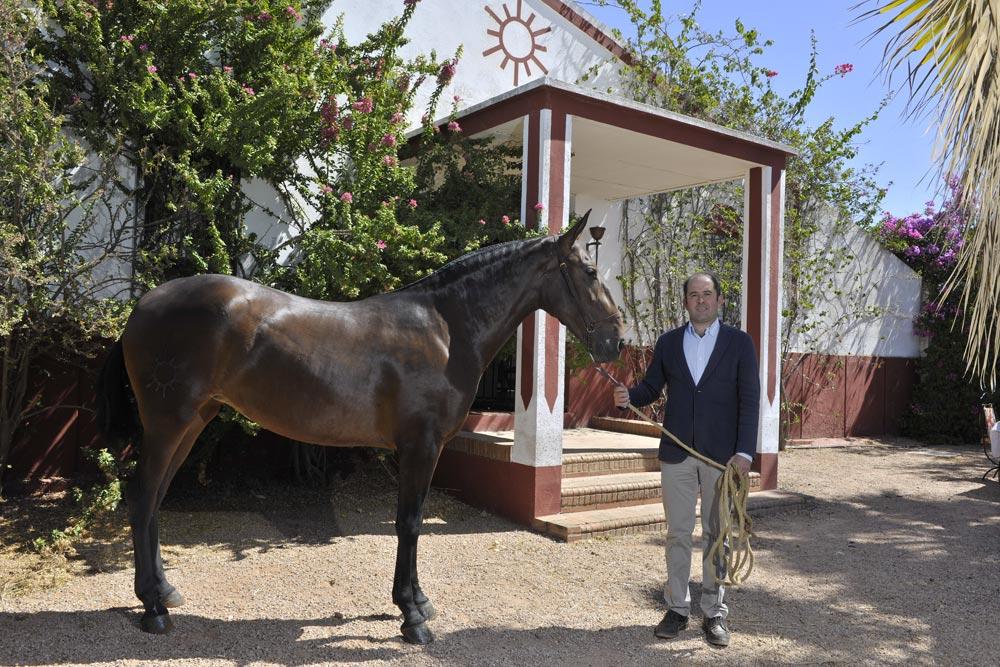 We leave Vejer de la Frontera at sunrise, we’re La Rambla bound, in the province of Cordoba. After a 2 and a half hour drive between awakening landscapes, olive trees and dirt roads, we get to the Yeguada El Sol where we’re welcomed by a giant bougainvillea in bloom. The host is Carlos Montijano-Carbonell Martínez who descends by that Carbonell family: the olive oil one.
The farm that his grandfather inherited from his father employed horses, at first anglo-arabs and then from the 70s also PREs, for agricultural work, mainly for the sowing and harvest of the olives. In 2004 Carlos becomes the manager of the farm and 6 years after the owner; however this is not his primary source of income, he works in a bank, so this is a hobby for him.

Mares in the fields

Mares eat in the pasture with their foals

View on the track, in the background the stables

Facilities for the hay storage

Hay and in the background some stalls

Space in the stables

Today Carlos breeds and sells horses from 3 years of age with basic taming. His main clients are riders, mostly from Central Europe, who need beautiful horses, that can move well. According to Carlos his broodmares are the true value of his farm, some of them descends from a 1859 blood-line. Carlos is in favor of natural mating. Once a year he leaves a number of mares in a corral with Distinguido (the stallion he uses who comes from a Florencio Moreno’s line).
Mating takes place preferably in Spring so to have foals of the same age, which, in addition to avoiding the stress of separation from the mother after weaning, allows not to have bigger foals who could injure smaller ones, he explains, “It’s a trauma to break away from mom, on top of it a guy passes by and hits you hard, it’s not that much fun!” His mares, together with their foals, are left free in the 150 hectares pastures of the ranch from April to September.
Thanks to a number of huge water tanks and a few power generators connected to old ice-cream freezers they succeed in keeping the water clean and cold and that’s why mares can be left free for a good part of the year. His Wachuma Sol, beautiful 2 years old brown coated female PRE, participated from September 14 to 17 to the XII Morphology Contest of Cordoba.
Yeguada El Sol employs one person, Antonio, who helps Carlos with his passion and pride. He started to work in the farm back in 2000 with Carlos’ grandfather. The most intense moment was in the owner’s office, when a tearful Antonio showed us all the old family files, with old documents of horses and the prize for Breeder of the Year won by Carlos Montijano-Carbonell.

Foals in the stable

Mare with her newborn foal

Valenciano Sol and other foals in the corral

Here the day goes by very quickly, between a walk around corrals and some rope training in the horse track, but according to Carlos these animals need time, they need to be developed slowly and with pacience, with no hurry, “everything with its timing” he says “it would be like teaching a child the Euclides algorithm before teaching them how to add, subtract, multiply or divide!”

The Duke of Infantado restarts here