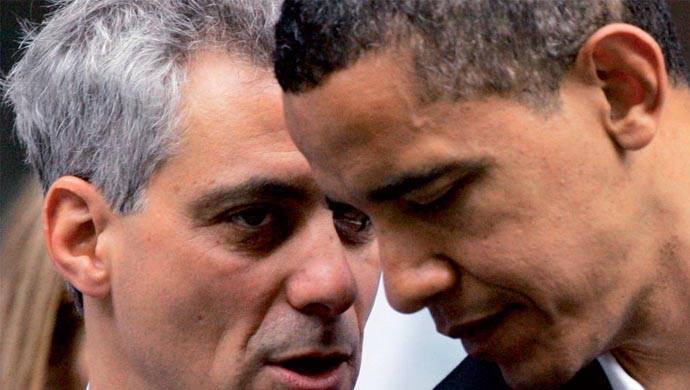 Meeting with his economic advisers at the White House, some time during November 2009, to discuss measures for stimulating employment, President Obama realized that everyone seemed to be in agreement. At which point, he called for a Time Out. Everyone was to go back to their offices for 30 minutes. Then the meeting would resume, with everyone putting forward at least one different point of view.

Recounting the incident, Larry Summers, the White House Economics guru remarked that Obama wants his advisers to think differently from each other, and to be prepared to defend their views. The president is, he added, very careful to identify those who have not spoken during a debate, and to ask them if their view diverges from that of the majority. In January, at a meeting in the White House Situation Room, Obama and the National Security Council were discussing the US Secret Service’s failure to put together the information they had to arrest Umar Farouk Abdulmutallab, the Christmas Bomber, well before his attempt to blow up Northwest Airlines Flight 253. That the president might be furiously angry seemed more than reasonable. Obama’s comment was  limited to saying that “This was a screw up that could have been disastrous.” There followed a cool and dispassionate review of the facts, which was a prelude to the president’s taking responsibility for what happened. New and more stringent security measures for passenger flights were also announced. The whole closely-focused and rhetoric-free.

GATHERING INFORMATION ALSO  FROM UNUSUAL INSTRUMENTS
Another example of the Obama management style was revealed during one of the long sessions when strategic policy in Afghanistan was being revised. Two military experts were deep in debate regarding a recent report on Post-Traumatic Stress Disorder, when the president  jumped in. He had obviously read the report.  No-one recalled having sent it to him, neither had he been briefed on the subject.  This shows that, despite the wealth of information that arrives in the Oval Office every day,  Obama also seeks out his own sources. He is a voracious reader, and has access to the internet on his desk. Meanwhile, his Blackberry allows him to send and receive personal emails. (It is also true to say that, among his reading is Sports Illustrated, and he follows basketball, football and baseball.) Fifteen months after his Inauguration,  the decisions taken and the outcomes achieved during Obama’s presidency are open to debate. There is no doubt, however, that when it comes to emergencies, Obama reacts quite differently from his predecessors. While George W. Bush could be called Mr.Hot-under-the-collar, Obama is Mr.Cool. While Bush depended on gut-reaction, Obama takes his time, reflects in a cool, calm, and collected fashion, considers consequences, and seeks inspiration from a variety of diverse sources. Where Bush saw things in black and white, Obama sees the gray scales.  To be sure, Obama has been spared the trauma of 9/11,and the shock of an attack on the American mainland. It is true to say though that George W. often reacted in war-like terms, thereby running the risk of not seeing the potential negative consequences of his actions. 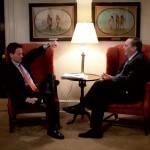 Timothy Geithner and Larry Summers in the West Wing Hall 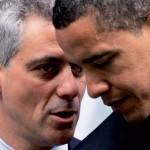 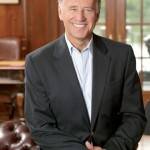 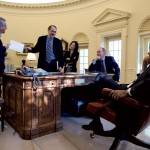 USING REVIEW AS A TOOL
Obama, on the other hand, is true to his lawyer’s training. He wants to see all sides, presenting his conclusions as the outcome of stringent logic and reasoning. Ideology and dogma are alien to him.  If, on occasion, he ends up doing the same as his predecessor, as in the case of   Afghanistan or the Al-Quaeda terrorist trials, this shows the basic pragmatism of the Obama administration. How does Obama address problems? ”He orders a review”, remarked Dana Milbank writing recently in the Washington Post. In truth, Obama ordered two reviews in regard to Flight Northwest 253. One was to address security checks in US airports, while other would concentrate on the Watch-List system for suspected terrorists. These reviews will probably become permanent. Speaking of those who accuse him of wasting time, Obama restates his credo. For he believes that while America’s enemies seek new converts, the American administration is re-examining and updating its intelligence-gathering and its institutions. Since Obama’s arrival at the White House, the review has become the essential first stage of the decision-making process. Even where this involves the risk of being accused of time-wasting.  In no particular order, we might mention the two reviews on Afghanistan, the latter of which took three months and concluded with 30,000 more soldiers being deployed there.  There was the review of initiatives related to economic stimulus, not to mention Iraq. The proposed closing of Guantanamo, Iran, Swine Fever, the Fort Hood shootings, anti-missile defence, the tax system, and the gate-crashers at the State Dinner for the Indian premier at the White House have all been subject to reviews. According to the Washington Post, the review is the trademark of Obama’s management style, adding that – had Dick Cheney been president, the USA might well already have invaded Iran, to punish Al-Quaeda, who are deemed guilty of having trained the Nigerian in Yemen. The use of the review as a tool is insufficient to explaining Obama’s special management style. It is perfectly clear that the incumbent “Commander in chief” favors facts, wants data and more data, is very attached to precedent and to historical analogy, and wants to have his own personal channels of communication. But who does the president turn to, and in what order, when he wants advice, inspiration, unbiased opinions from people who are not intimidated from speaking out for fear of contradicting the boss? 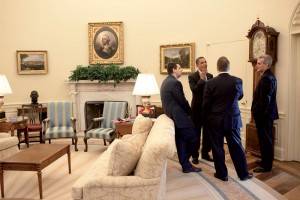 Obama and his advisors in the Oval Office

SEEK ADVICE INSIDE AND  OUTSIDE YOUR CIRCLE
Obama’s closest circle of advisers is made up of just four people. There’s the prickly Rahm Emanuel, who is the Chief of Staff, Robert Gibbs, who is Obama’s spokesman. David Axelrod, the strategist, and Valery Jarrett, Obama’s long-time friend make up the quartet, and hold the role of Special Advisers. With the exception of Emanuel, they are all veterans of the 2008 presidential campaign, and are thus very much tied emotionally to Obama. Some might consider these emotional ties as being excessively strong, the critics including not a few Democrats, who fear that he is unduly influenced by these people. In point of fact, the president depends on a much wider group of people from whom to seek advice.  The first of these is obviously Joe Biden, the Vice-President, on whom Obama calls for input on international affairs. Then there’s Larry Summers for advice on the economy. Ex-senator Tom Daschle is Obama’s health guru. Dennis McDonough is a  rising star and provides information on foreign politics and, last but not least, Peter Orszag, who is Director of the Office of Management and Budget. In recent times, Paul Volcker; the octogenarian former Head of the Federal Reserve has become one of Obama’s economic advisers, this as a consequence of the battle against fat-cat Wall Street bonuses. What’s most interesting about Obama’s management style, though, is that he is not averse to seeking advice and wise words even outside White House circles. In early-December 2009, for example, Paul Krugmann, the leader of the group of Obama’s left-wing critics, as well as the winner of the Nobel prize for Economics in 2008, was summoned to the Oval Office for a working session. Less publicized are the long conversations Obama enjoys on the golf course with journalist Tom Friedman, an expert on globalization as well as a Pulitzer prize-winner. There have also been (four) private visits in the last year from General  Colin Powell, the former Secretary of State, as well as from the patriarch of American investors, Warren Buffett. The list would not be complete without a mention of the former Catholic archbishop of  Washington, cardinal Theodore McCarrick, with whom Obama discusses the Middle East and health reform. David Axelrod has been heard to explain that the president needs to have contact with wise, sensitive people with vast experience, and that, for Obama, General Powell and cardinal McCarrick are prime examples of such people. 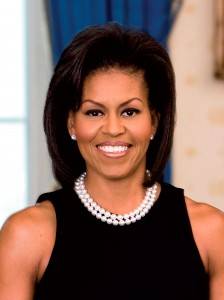 THE ROLE OF THE FIRST LADY
Michelle Obama isn’t to be under-estimated, though, say those in the know. A woman with strong opinions, she says what she thinks, and has a closer rapport than does the president, with American families, especially those of the military, whom she visits regularly. According to Axelrod, in private, the First Lady is a critical observer, while expressing common sense opinions. Her views are pivotal. She is also the one who keeps the president in tune with his responsibilities as a father. Every evening at 6pm, when he is in Washington, Obama stops what he is doing in the West Wing and moves across to the East Wing, where the family’s living quarters are located. Here, he has dinner with Michelle and his daughters Malia and Sasha. At 8pm, he goes back to the Oval Office, where he works into the night. More, Barack and Michelle try never to miss the girls’ baseball and soccer matches, or PTA meetings.  While some may find it cloying, these family rituals are designed to stress that even the president of the first SuperPower can—and should—enjoy the pleasures of family life. For it helps him keep his feet on the ground, and his mind focused on solving problems while taking into account issues that, to some degree, reflect those that affect us all.