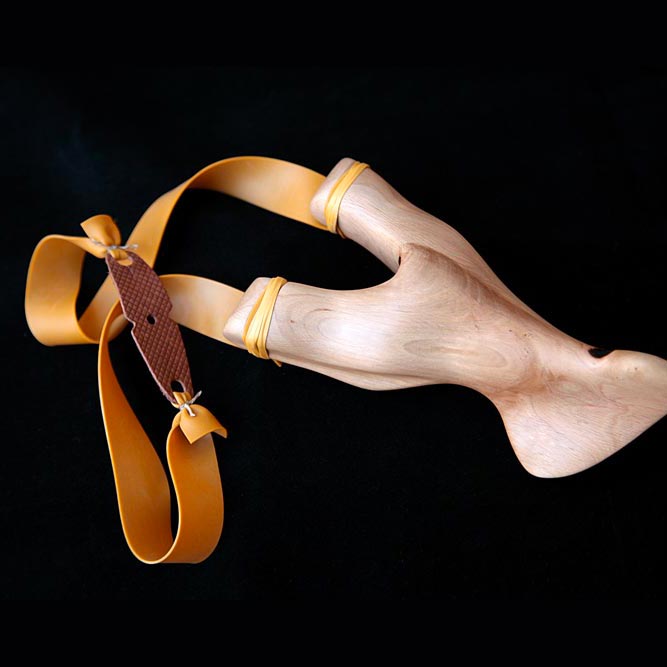 Often when we become passionate about something, we hope it will become a job; other times we like it because it’s a hobby or a way of meditating and relaxing. One thing is certain, however – the common denominator is passion. 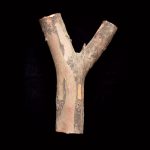 Natural yew (Taxus baccata) bifurcation, cut and left to dry for approximately one year. Glue is applied on the top of the three edges of the fork so to avoid ruptures caused by the natural strains of drying wood. 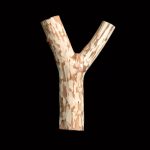 The bark is removed from the fork. The darker stains of the phloem become visible. Once started, the entire process will take 12 hours spread over 3 days. 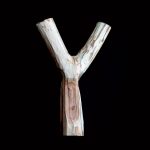 The fork is roughly modelled and carved with a knife and blots so to outline an ergonomic shape for the new slingshot. In this phase the sapwood and heartwood come into play. 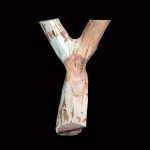 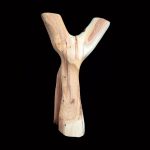 In this phase rasps of different grits are used to further model the fork. In this case, Japanese rasps of 3 different pitting degrees. 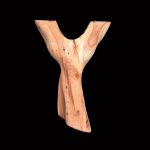 Once the shape wanted is obtained, the wood polishing process starts with sandpaper. In this case we started with a 240- grit sandpaper and finished with a 1,000-grit one. 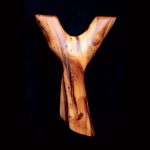 The last steps were done with 2,500-grit sandpaper. The pores of the wood are closed and the slingshot feels almost like velvet to the touch. Finish is achieved by applying a few layers of camellia oil, an alternative to beeswax. The wood is not treated with paint so it stays natural and alive. 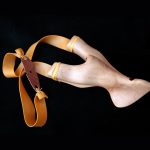 Here is a complete slingshot made of hazel. The rubberbands are branded gold Theraband and are mounted on a leather pouch. The making of this slingshot was very similar to the one described in the pictures above.

For many, passions are sparked at an early age, often passed on from generation to generation. For Nathan Masters, aka FlippingOut, the 38-year-old CEO of SimpleShot from Asheville, USA, the passion started with his great grandpa. He recalls: “I spent most of my days with my great grandfather rambling about the farm. He always had a slingshot in his pocket to dispatch rats in the chicken house or keep the crows out of the garden,” and adds, “He made me my very first slingshot from an apple-tree fork.” Others develop a passion thanks to their peers or siblings and cousins. José Muciño, aka Chepo, a 45-year-old former pharmaceutical factory employee and now photographer, recounts: “I have been shooting slingshots since I was a child and always made them with a natural fork that I would try to get in any way I could,” and adds, “Together with my cousins and brother, we started building catapults as my village tradition taught, but one day when I saw a slingshot that an older cousin of mine had, I felt the need to go back to my origins, find a natural fork and work it myself. I still have that one slingshot.” For still others, the love of slingshots started from functionality, as is the case for Lee Silva, a 38-year-old metalsmith from Visalia, USA: “I built my first slingshot four years ago. It wasn’t great but it served its function well, which at the time was to keep the sheep on the ranch from devouring a small island of grass and olive trees where I would rest and entertain visitors. None of the animals were injured.” For others it’s a childhood passion that was only recently brought to life again, such as for Roberto Benzi, aka Bob Fionda, a 57-year-old professional photographer from Milan, Italy, who claims: “My passion for slingshooting dates back to when I was a kid. I remember my days in the countryside shooting at old cans with my friends.” He adds: “This love came back a few years ago, mainly because of my great love for wood and as an alternative to archery.” “I shot my slingshot a lot when I was a boy, and rediscovered the hobby in 2008 when I found a slingshot subthread on a German gun forum, and got the bug,” says Jörg Sprave, a 49-year-old executive manager in consumer electronics from Burgkunstadt, Germany.

SLINGSHOTS 101
A functional slingshot can be made with little more than a tree fork, a pocket knife, a handful of rubber bands and a scrap of leather in less than 10 minutes. “However, we also seek true beauty, so some slingshots might take weeks to complete,” says Masters. “I can make a very functional slingshot from any kind of wood within maybe five minutes, but my most excessive construction (the car-sized winch-operated slingshot cannon) took four full days to make,” says Sprave, who adds, “A conventional handmade slingshot with a top-notch finish takes about four hours.” It really depends on many factors, such as the quality you’re after and the material used – for example, slings made out of metal need to be done really quickly as the material doesn’t stay hot forever and the time frame for forging is short. “Forging steel slingshots is a fast-paced process, and when everything goes right a simple shooter may be done in as little as two hours, but if I’m forging something new or working in a direct manner they can often take as long as one or two days,” says Silva. Starting from the classic bifurcation Y in natural wood, they can be built with plywood and plastic materials as well as iron, aluminum, brass and titanium. They are generally broken down by type of handle and mounting rubber bands: a hammer grip, grip thumb-index, gangster-style and handle with wrist support. Fantasy, technical testing and materials exploration – there is no limit. “I have seen small and powerful catapults built using bottle openers, old wooden ladles, slings made with parts of old metal hangers, and classic resorteras from South America,” says Benzi.

THE PASSION THAT SOMETIMES BECOMES INCOME
Slingshots are an example of how a hobby or passion can sometimes become a full-time career as well as an interesting, fun and amusing form of income, while still remaining a hobby. For example, Sprave makes money from YouTube commercials and from his products. “I also designed a commercial model, the Rambone, which is made from plastic and is sold by a professional store from which I get a share,” confirms Sprave. Masters has started a company related to slingshots, he confesses: “As a business from which I make a living, I build slingshots to provide others with shooting tools of the highest quality and value.” “I sold some slingshots in the past three years, mostly to American and European collectors, but I prefer it as a hobby rather than making it a real job. My slings are made entirely by hand with simple tools such as knives, rasps and sandpaper, nothing else, so the time taken is disproportionately exaggerated compared to the price for sale on the market,” says Bob Fionda. For others it remains recreational, a simple hobby, although Michael McClure, aka MJ, a 37-year-old father from Otterebein, USA, who participates in shooting contests, says he’s looking for ways “…to turn it into a career.”