Friendship might sound like a spontaneous evolution of human relationships where affinities and emotions create bonding and affection, but in Japan friendship is the result of an elaborate process.

The elephant in the room is the “distance” between people, between things. This thin veil of fog that hides the sharp picture or defines the contours of things. Imagine a vivid HD picture with crisp colors where you can also see the imperfect granularity (the Western approach to reality), or a blurred picture where shapes are not clearly defined but where you also don’t see the imperfections, and the overall light exposure and colors create a harmonious mélange. The latter represents the Japanese way. Talking to my friends, I realized that on average the Japanese have fewer “friends” than Westerners. There are many reasons for this. Self-disclosure is limited, as are emotional displays, and the perceived benefits of telling your friends your problems and fears are probably less. People rarely reach out for help in a culture where bothering others with your issues is considered rude and selfish. People prefer to elaborate their discomforts in loneliness and introspection. Time is another big problem. Working life basically consumes 90 percent of their adult lives, excluding sleeping time.

THE ART OF BEFRIENDING
There are basically two types of “friendships” in Japan. Those from school days, which are considered, by most, the only long-lasting and genuine friendships, and those you build in your workplace. Your co-workers are the people you see most, the company is like a family and the boss is god. No wonder companies have created a way to incorporate private life into their structures rather than let it happen outside the workplace.

DRINKING TOGETHER
One of the most important cultural dimensions of Japanese society is the “nomikai,” meaning “drinking to socialize.” Every company, big or small, has a lot of nomikais, usually at least once a week. A nomikai is driven by the head of the team, or an equivalent organizational unit, who invites his team members to join him for drinks after work. The term “invitation” is a euphemism, however, as participation is compulsory!

NO EXCUSES
In Japan you can’t just say, “Sorry, I’ve got plans,” “I’m playing sports,” “I have a date,” “I have a dentist’s appointment,” or “My child has a fever.” No. Company comes first, so nomikai is paramount. If you don’t attend it is considered extremely rude and disrespectful, signaling that you don’t fit into the team or into the company. Some Japanese actually like it and some hate it. But nobody can avoid it. After work, the team goes to an inexpensive “izakaya” (a pub in Britain is the closest equivalent) to drink and eat some food, where the female staff will of course pour beer or wine for the boss (his glass can never be empty, that would be very rude) and maybe empty his ashtray, too. After a couple of “kanpai” (toasts), you will see the whole atmosphere changing.

FROM FORMALITY TO BUDDYING UP
The magic of alcohol makes it happen again and again. The visible shift from the hyper-formal relationship of rules and expectations clears the way for private subjects and even intimate confessions about family, troubles and concerns. Also, work-related issues can be discussed with the boss in a casual way. In Japan, behavior is driven by the dichotomy between “honne” (the inner view, the real thinking) and “tatemae” (the outside view, the way to display oneself to preserve the harmony in relationships). Business relationships are normally driven by tatemae and by very formal communication. But the unwritten rule of the nomikai is, “If you show me your honne, I will show you mine.” This can sometimes be the formula for an embryonic form of friendship. Of course, the day after the nomikai, the relationship goes back to being formal, but still the bonding happened, something has been established.

WORK NEVER STOPS
For higher-level employees and executives, the weekends will be also usually be used to connect with the boss through playing golf together. Hence, work never stops. The question is: how long will these friendships last? It’s difficult to say. Once you change company, although quite a rare event in Japan, you will most likely lose your old friends as you belong to a different team now. Particularly for men, in Japan there can be a lot of loneliness after retirement. Most men don’t have friends or hobbies. They might join groups with similar interests in a specific area, but there’s nothing like the spontaneity of what we call friendship in Western cultures. Of course, in the countryside it’s probably very different as community life triggers friendship in a less conventional way. There, you might sometimes hear “Kyuki ni masari kagami nashi” – “There is no better mirror than an old friend.” 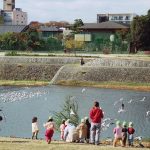 Remind me to never grow up 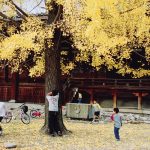 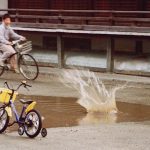 A lifetime of childhood 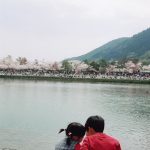 Children on the shore

Reiko Nonaka is a Japanese photographer working and living in Paris. Her interest in photography started between 2000 and 2005. During those years she attended a photography school in Osaka, while working at the same time. In 2002 Reiko had her first exhibitions both group and solo shows. In order to improve her photographic work, she moved to Paris in 2005, where she studied art history at the Sorbonne – and where she obtained a master’s degree in Photography and Contemporary Art at the University of Paris.

About her work, Reiko explains, “Just after I started studying photography, I moved to Kyoto and I chose it as ‘my corner’ in Japan. Every day, life in Kyoto brings many small ‘monogatari’ (short stories). I have often seen gestures and moments that we all thought today were long gone. Each monogatari developed in front of me in a blink of an eye, but it felt like they had been there for a long time,” she continues “These instants appeased me.”

Photos. All photos are courtesy of Reiko Nonaka.

It’s All About Behaviors