Moreno Cedroni, an Italian chef who holds two Michelin stars, has brought an avant-garde spirit to Italian cuisine. Born in Ancona in 1964, he opened his first restaurant, La Madonnina del Pescatore (regarded as one of the top 10 fish restaurants in Europe) in Senigallia, when he was only 20 years old. Moreno when writing 8 recipes for Work Style had the objective of taking healthy and tasty cuisine in workplaces. 8 professionals were put to the test in cooking these recipes in their homes. Lunch is a crucial appointment of the day, even when we work. Too many people don’t eat well. Very few individuals dedicate the time necessary to eat a good dish. Taste begins with preparation. This is the starting point for our idea to think of 8 recipes to encourage ourselves to eat better, even when at working.

LUNCH BOX FOR ALL

For workers who like homemade food, he has designed eight (easy to make) different lunch boxes for Work Style readers. One of the best ways to enjoy food at work is not to eat too much. Overeating can make workers feel stuffed and sleepy. They should eat light food that supplies enough energy to continue through the workday.

To create in a matter of minutes a healthy packed lunch at home to enjoy later at the office.

Fish and vegetables are the main ingredients of these recipes, which anybody can make at home without the kitchen of a great chef. There are eight recipes: four for seaside tastes, where the fundamental ingredient is fish; and four for those who are veggies or like vegetables. “It can be nice for those who love a highly tasty cuisine,” Cedroni says.

To make a healthy cuisine, we first need quality ingredients. The first thing we must do before cooking is consider the season, then add the right amount of salt, fats, and proteins in proportions, that results in a balanced dish. Working people don’t have a long time for meals and tend to eat in haste, so they should invest the little time they have in eating good quality food. As Cedroni says, “Whether you eat at an unadorned table or whether you eat hurriedly standing up, if it is good, tasteful, and nice to look at, it will satisfy you and your stomach.”

Moreno Cedroni has chosen a large variety of ingredients to make these lunch boxes, and he has reasons for that. “I have used white tuna–not the red because it is in danger of extinction–with quinoa. This is the year of quinoa,” he explains. He has also used octopus because “it is a mollusk known to everyone, so it’s easy to identify.” Cedroni made fish soup and fish lasagna too, which “are good if you need to warm them up,” he explains. In addition to fish, he uses vegetables as well. “I have made an aubergine cooked in a pan, which makes it very soft, and embellished it with tomato sauce and burrata, a type of mozzarella,” he says. With celery he made “sedano rapa bistecca.” This is a steak seared in a pan with lime puree and arugula sauce. He cooked a vegetable soup too. “Nice, crunchy, and colorful, it goes with pansies that enhance the dish with tannin,” he says. The last recipe was an omelet (liquid and soft) with al dente Jerusalem artichoke and parsley oil.

To finish, Moreno Cedroni told us a secret. “If I had to choose one of these recipes, I would say the fish soup. As I was born in a region well-known for its fish and have eaten it since I was a little boy, even in my nursing bottle, I prefer that dish,” he concludes.

AN ADVICE FROM THE CHEF

“For mere mortals, I would absolutely recommend a thermometer, a small investment, that allows us to comply with cooking times. If we want to cook octopus or celery at eighty degrees, we can control the temperature, something I find very important. In addition, we need to be very careful with the use of the flame, which has to be low, and cooks in the right way. We must also be accurate in the use of salt because a mistake could damage our recipe.” 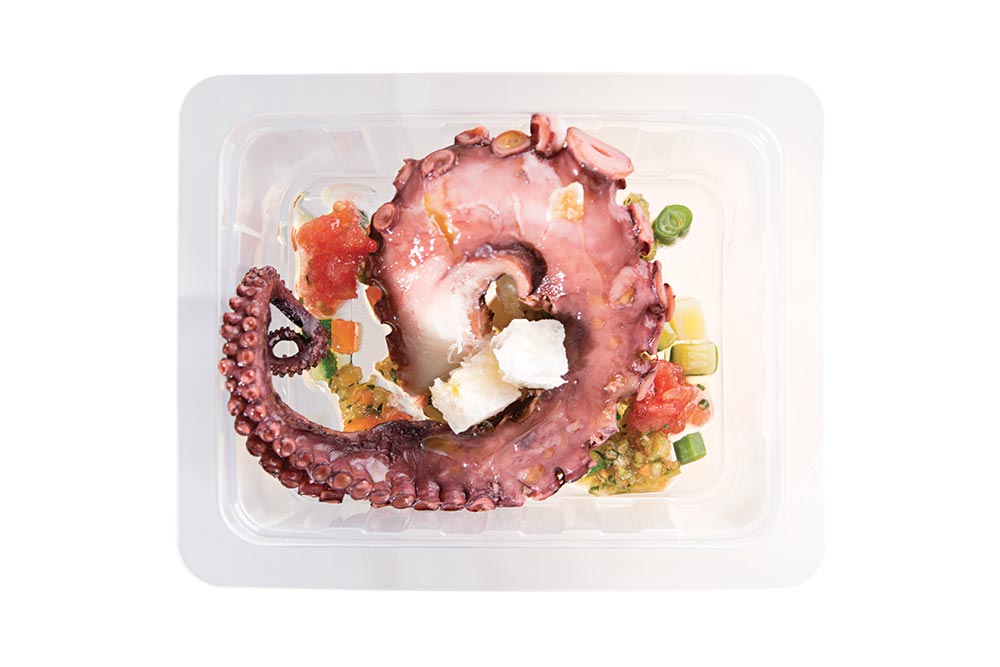 Take an octopus (about 1 Kg) , rub it with salt, wash it, and prepare a quart of bouillon with 5 liters of water, 25 grams of salt, 20 grams of celery and boil it. Add the octopus and boil it for about 2 hours and cool it down in the same liquid. Then drain it and keep it in the fridge for a couple of hours to keep the skin in place. For the green salsa , cut 30 grams celery, 10 grams onion, 20 grams zucchini, 20 grams carrots, 2 grams parsley in bits. Add 30 grams of extra virgin olive oil , 3 grams of white wine vinegar, 5 grams of desalted capers. Whisk with an electric mixer and add salt to taste.Dice 50 grams zucchini, 50 grams carrots, 50 grams green beans, 50 grams celery  and boil in a liter of water with 7 grams of salt. Stew vegetables “al dente.” Drain them and let cool down in the fridge to halt the cooking. For tomato water whip 100 grams of tomato with 2 water spoons, a pinch of salt and 10 grams of extra-virgin olive oil. Place the green sauce at the bottom, add boiled vegetables, tomato water and finish with an octopus tentacle and a bread croutons on top. 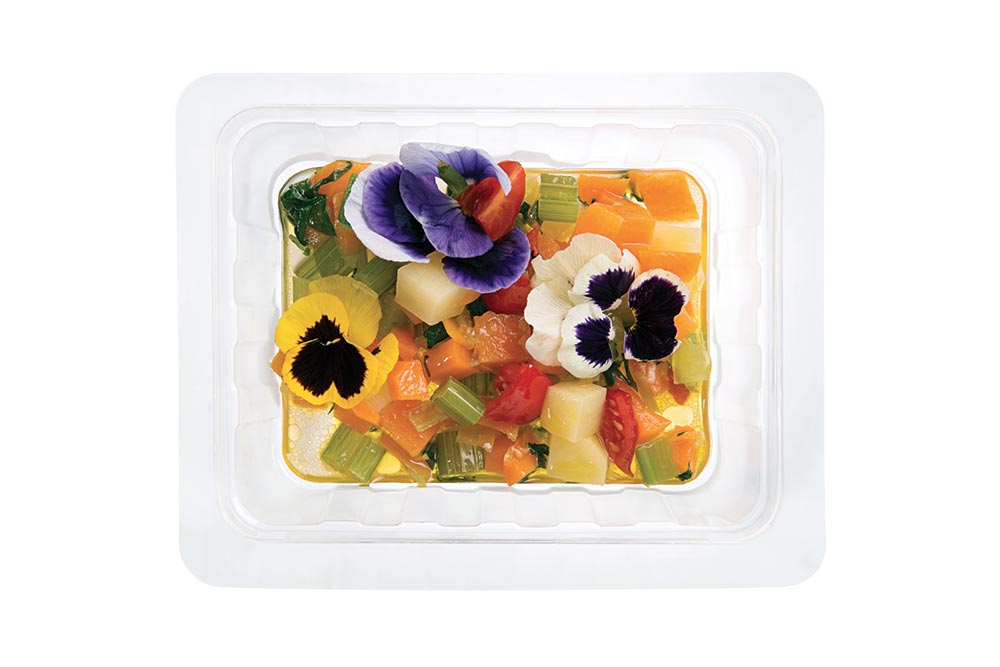 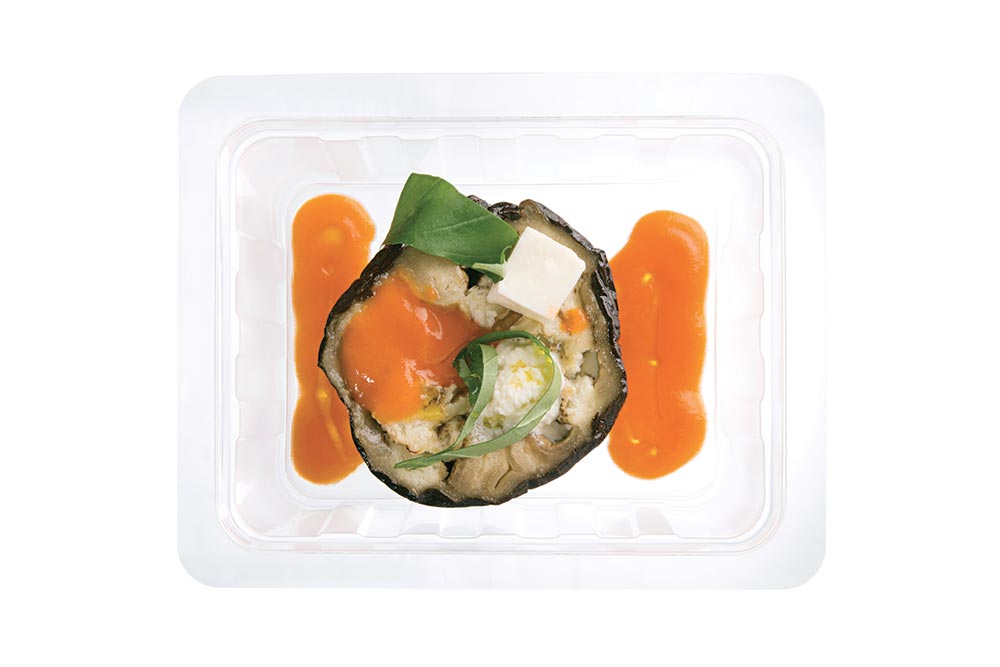 Slice. 400 grams of eggplant in 5 cm slices. Heat up a non-stick pan and switch to low heat, place eggplant on the pan and cover so that the steam will soften the vegetables. Cook it for around 10 minutes until it melts inside. For the sauce take 200 grams of tomatoes, wash them and cut them in slices, pour 20 grams of extra-virgin oil and 10 grams of grated white onion in a pan, add tomatoes and cook it covered for around 10 minutes, add salt to taste and then whisk it. Slice 10 grams of burrata. Flavor the eggplant with tomato sauce, burrata and basil. 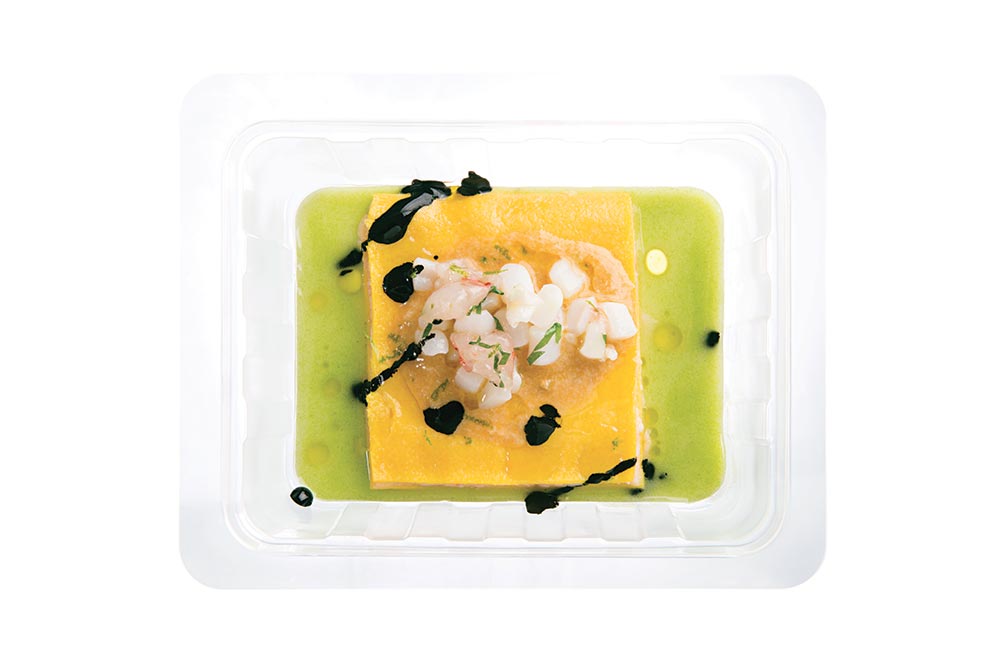 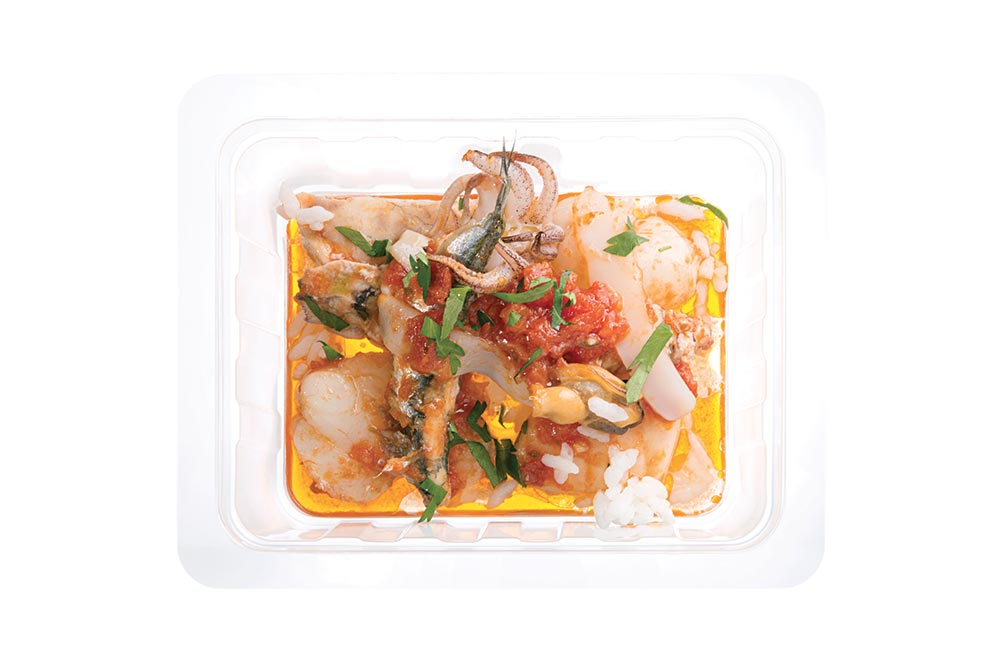 For the broth, put 5 grams of grated garlic and 20 grams of grated white onion with 50 grams of extra virgin olive oil in a pan, sprinkle 20 grams of vinegar and vaporize it. Add 300 grams of a tin of San Marzano crumbled tomato hand crumbled and a star anise berry. Boil it for about 15 minutes and add salt to taste. Take a terracotta or a similar baking dish, pour a drop of oil and place pieces of circa 20 grams each of anchovies, mantis shrimp, calamari, sole, cuttlefish  and some mussels and clams. After, add a couple of spoons of broth and add a little bit of salt. Cover with aluminum paper and put into a oven at 180 degrees for 10 minutes. Take it out of the oven and add a slice of sea bass, parsley and a rotation of white pepper. For sushi rice soak 100 grams of carnaroli rice in 250 grams of water for an hour, and then in a small saucepan bringit to a boil and cover it with aluminum foil and place it in the oven for 12 minutes at 180 degrees. Then season it with 20 grams of vinegar and 3 grams of salt. 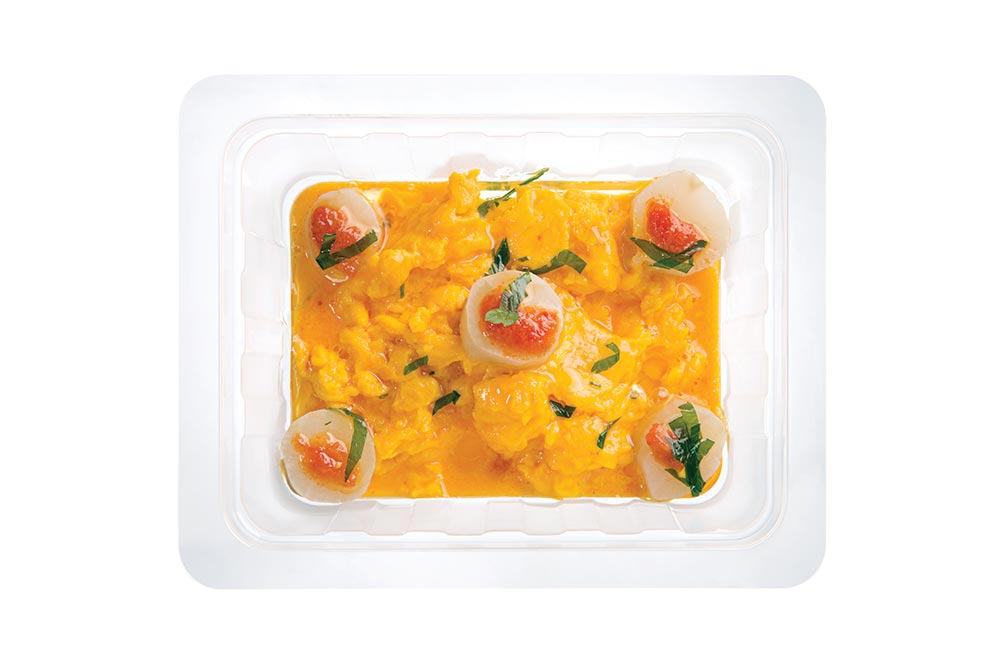 For the omelet mix together 200 grams of egg, 80 grams yolk, 50 grams cream, 1 gram salt and a pinch of white pepper. Peel 200 grams of Jerusalem artichokes , dice it and cook it in a liter of boiling water with 5 grams of salt for about 8 minutes. Take 200 grams of tomatoes, wash them and slice them. Then put the tomatoes in a pan with 20 grams of extra-virgin olive oil with 10 grams of grinded white onion, add tomato paste, cover it for around 10 minutes and let it cook. Add salt to taste. Warm a non-stick pan, heat up two tomato teaspoons, pour two thirds of omelet to make it thicker. Once it is out of the fire add the rest of the egg to keep the omelet soft. Add Jerusalem artichokes dices and minced parsley. 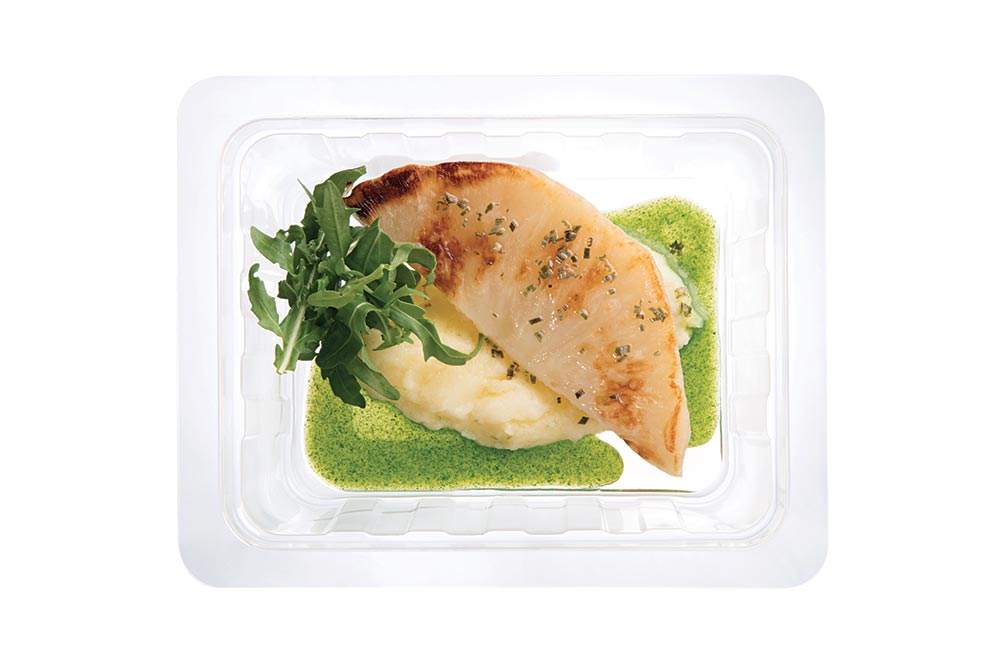 Wash a celeriac of about 500 grams, peel it with a peeler, slice it to 2 centimeters slices and boil in two liters of water with 12 grams of salt . Boil them for 20 minutes; make them “al dente.” Drain them and put them into the fridge for a few minutes to halt the cooking, then warm a non-stick pan, pour a drizzle of oil and braise celeriac slices in both of the sides with a little bit of salt. Then flavor with a spoon of salmoriglio. For salmoriglio mince some rosemary and add to 50 grams of extra-virgin oil, sprinkle some lemon juice and a pinch of salt. For the purée, simmer in water (without salt) 500 grams of potatoes and once cooked drip them, peel them, squash them in the potato masher and add 200 grams of diced butter, which will melt with potatoes high temperature. Mix it with a whisk and add 100 grams of hot milk. Finally grate the peel of a lime and add salt to taste. For the green sauce, pour 50 grams of arugula in boiling water for a minute, drip it and whisk it with 100 grams of cooking water, add 20 grams of extra-virgin oil and a pinch of salt. At the base place the lime purée, put the celeriac slices on the and add some fresh arugula. Add the green sauce at the end. 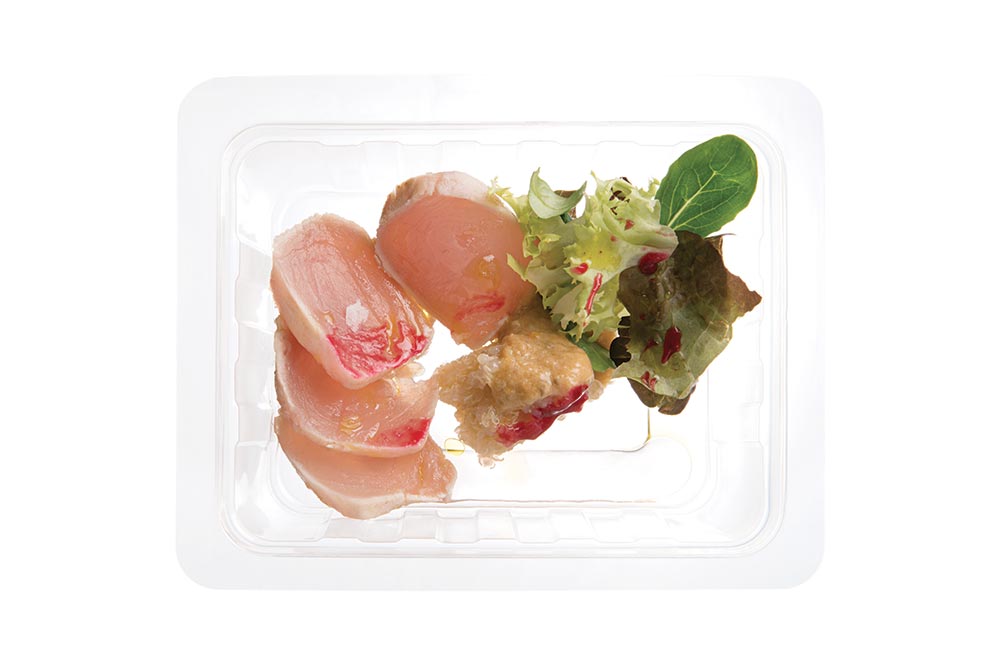 For the quinoa, cook 50 grams of quinoa and 6 grams of salt for about 20 minutes in a liter of water and then drain. Season with vinegar, sugar and salt melted together. For the tuna sauce, stew 25 grams of carrots, 25 grams of celery and 25 grams of onion with 30 grams of extra virgin olive oil over a low fire in a covered small saucepan. Then drain and cool down. Whisk together a tin of white tuna, desalted capers, anchovy in olive oil, and vinegar. For the light broth, whisk together water, Campari, pink pepper, raspberry vinegar and a pinch of salt and filter it. Clean and wash some tender salad. Scald briefly the white tuna filet in a hot non-stick pan marking all of the sides. Cool down and slice it. Place the quinoa at the bottom, add the tuna sauce and the white tuna slices. Place the light broth and salads on the side, add a little bit of salt.

Eight temerarious lawyers from the law firm Grimaldi and Lombardi Molinari Segni in Milan test their culinary abilities in these recipes by chef Moreno Cedroni, who holds 2 Michelin stars. 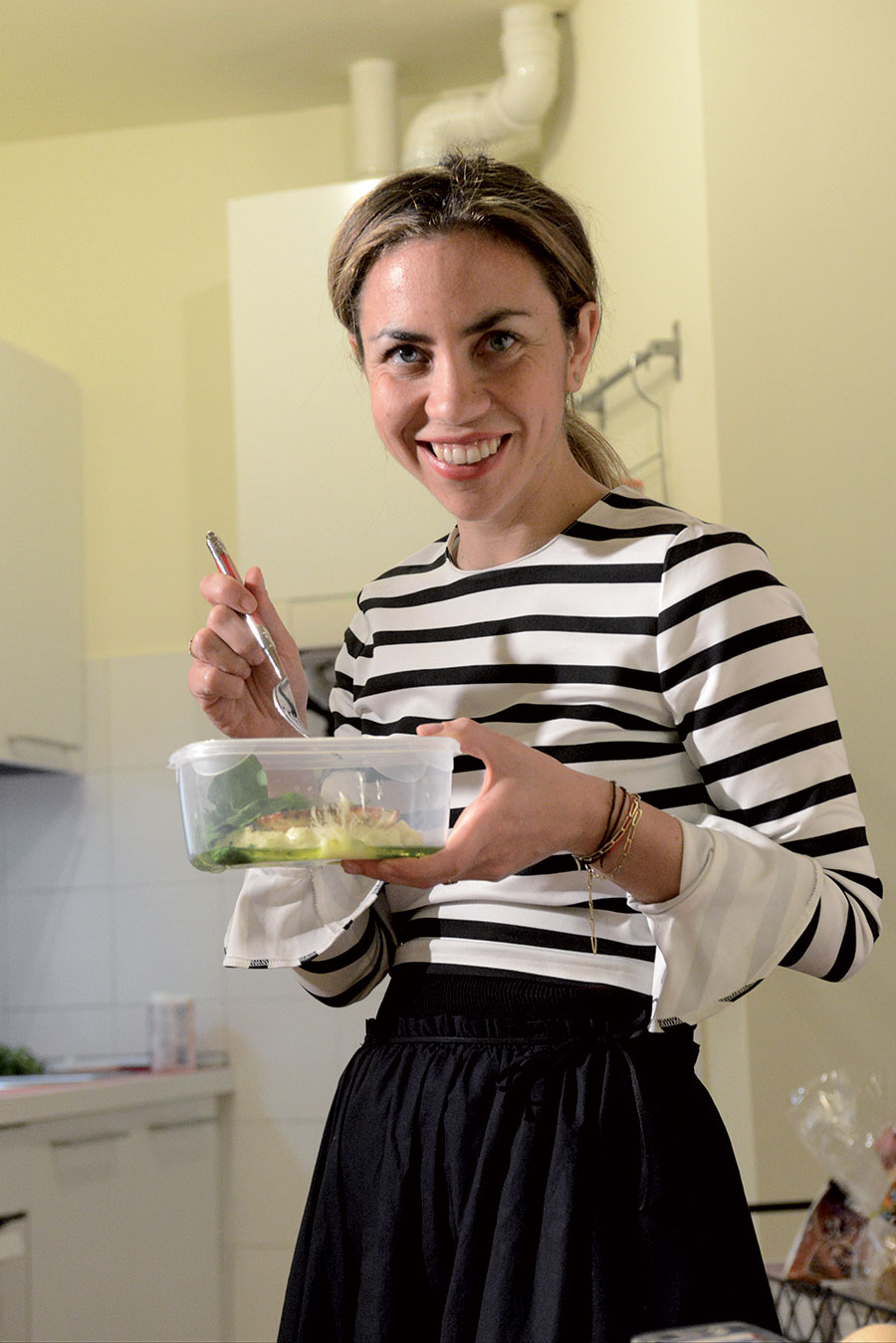 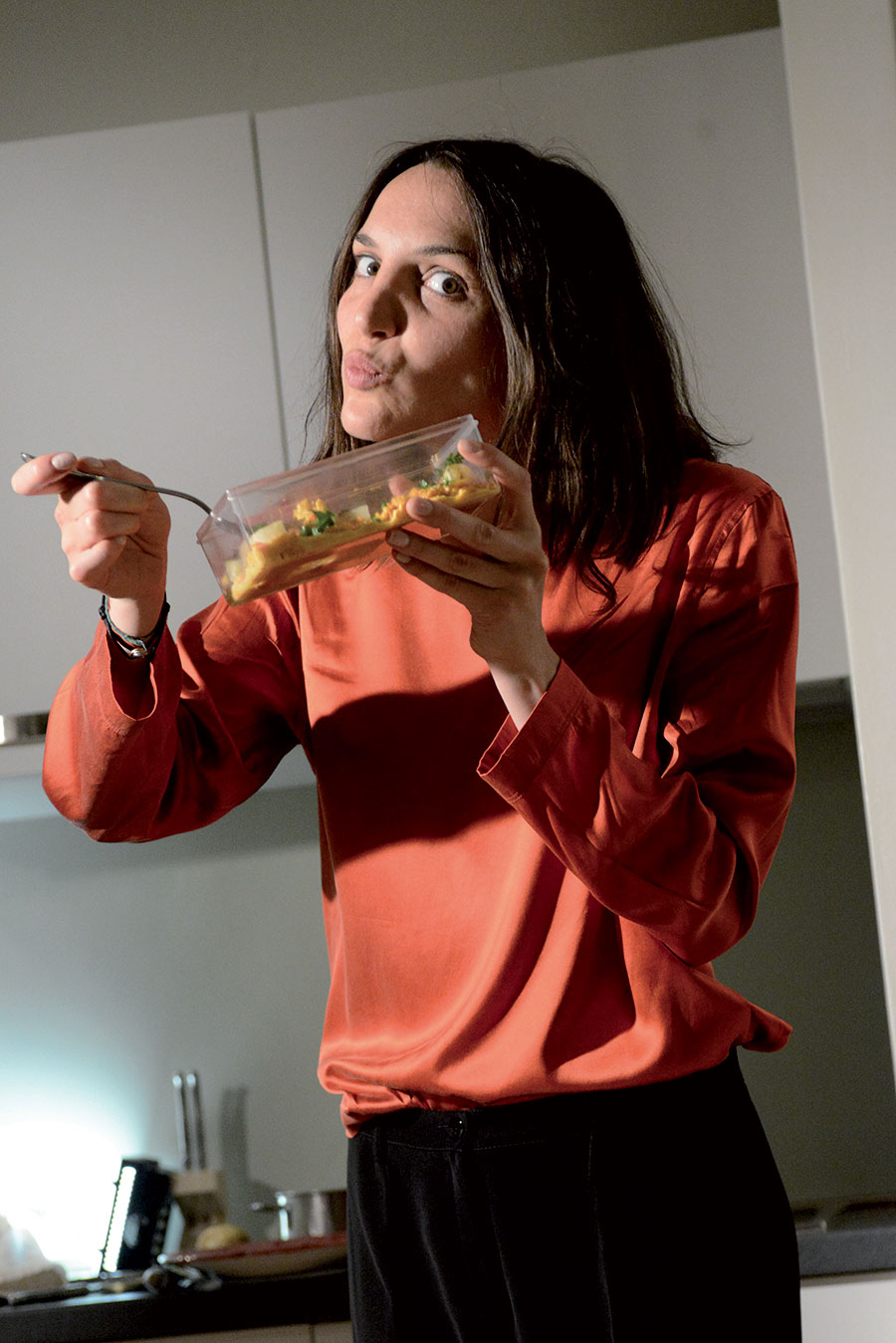 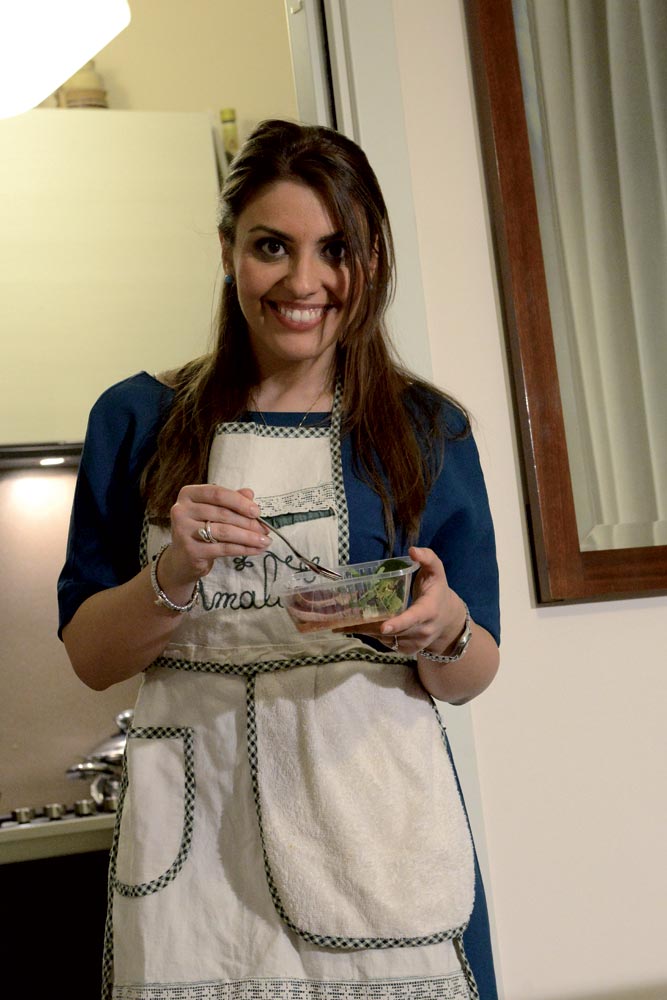 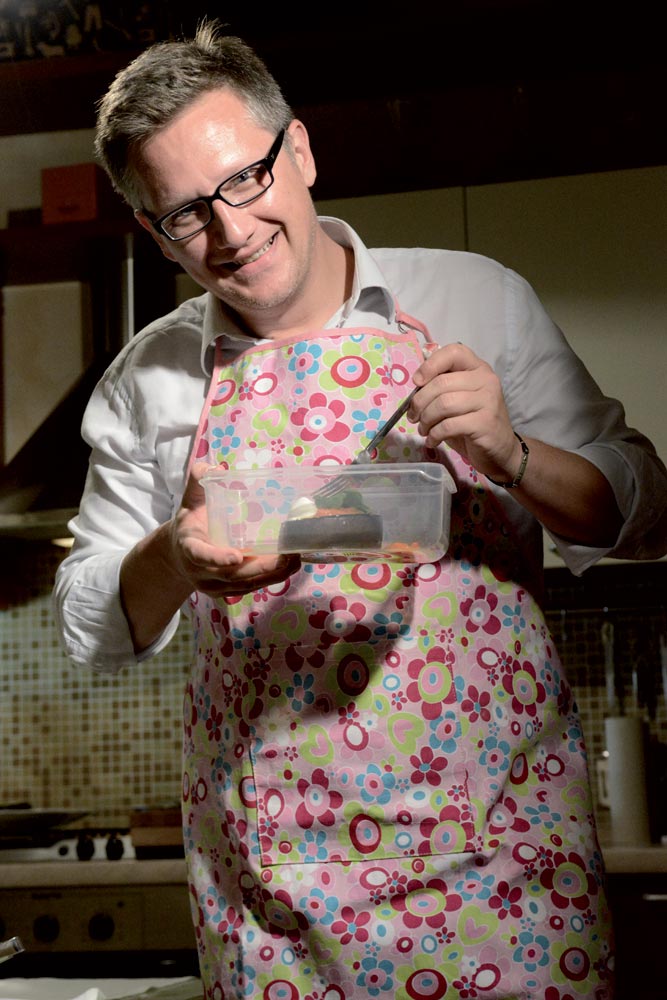 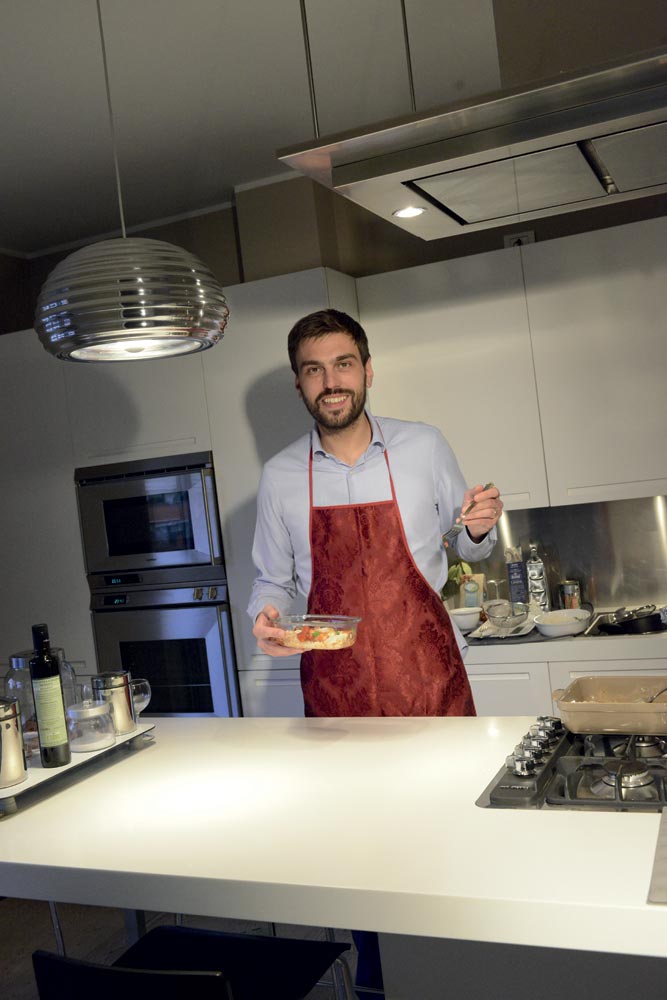 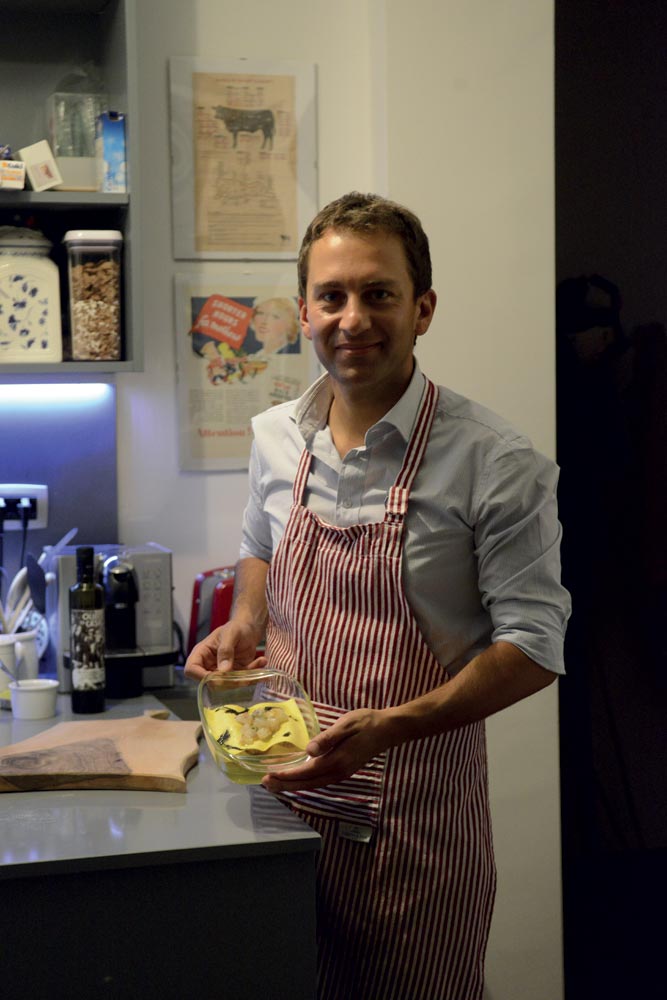 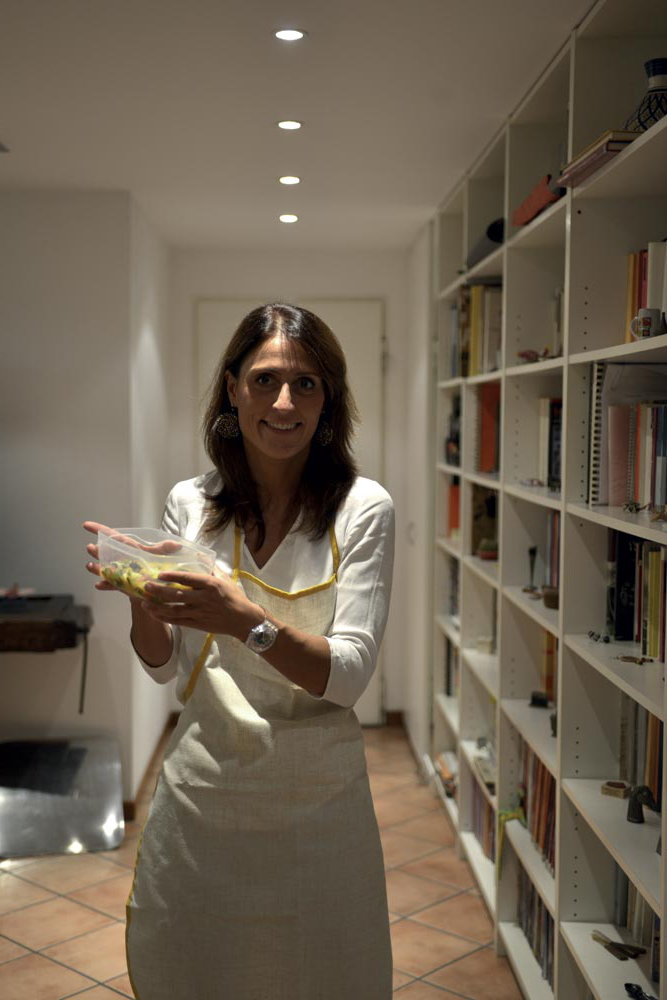 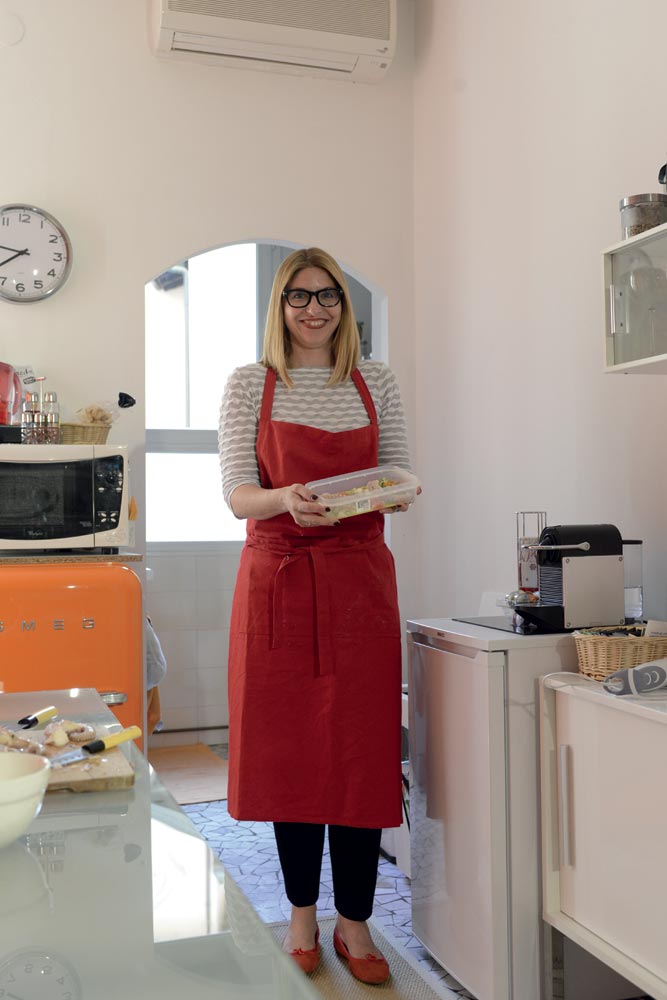 All photos are by Francesco (Chicco) Di Loreto, a photographer and director for the advertising and publishing industry. Besides shooting photographic images for a number of national and international brands, he has directed both commercials and documentaries. Currently working on a documentary about Japanese musician Damo Suzuki.