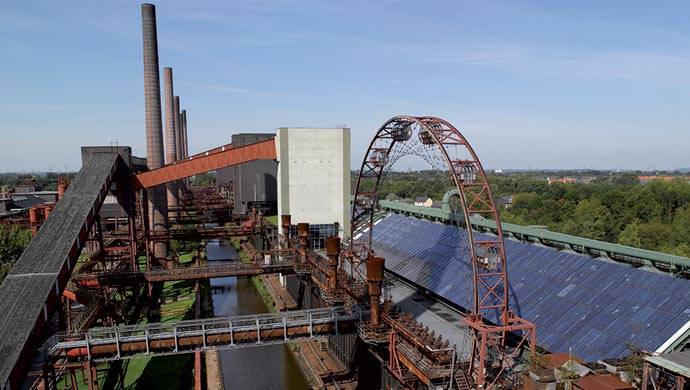 Over the last three centuries, a long story of complex relationships has existed between ‘Art’ and ‘Industry’.

Since the 18th and more clearly since the mid-19th century, art and artists have closely collaborated on the enhancement of new industrial techniques in such product fields as crystal, ceramics, metals or wood; and luxury fabrics applied for instance to the arts de la table or to the various sectors of affluent classes’ domestic life. Later, the great challenge of iron, steel and concrete began, succeeding in creating the new aesthetics of architecture for industry, while many industrially manufactured items were becoming a favorite prey of the modern design discipline (just think of the automobile industry), and to its rather dictatorial imprint. Towards the end of the 20th century however, the above mentioned relationship went through a deep transformation. 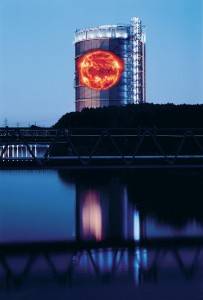 Gasometer with image of the sun. Photo by Wolfgang Volz 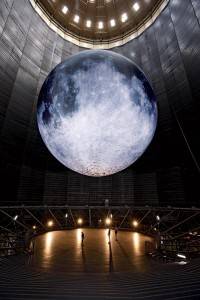 The ‘largest moon on earth’ in the Oberhausen Gasometer Sculpture. Photo by Wolfgang Volz

In the aftermath of de-industrialization, a main problem (among others) arose: under which conditions could a number of huge industrial buildings (endowed with a significant value) be adequately re-used and, consequently, safeguarded? Among a whole range of possible choices, one has appeared as a favourite: some of those monuments and workplaces might well be conserved in the new role of containers of art. On this point, the connection between art and the former function of the concerned workplace has been disrupted. The latter serves completely different  activities, which in turn offer opportunities for a long term survival of the premises. On the other hand, talking about containers of art remains ambiguous: it can regard artists and their production, or works of art – something like a museum. For decades, industrial halls with huge spaces have been fitting the needs of large collections or of different kinds of important shows. It often happens that empty spaces with many undefined possible vocations are instead used by dance, theater, music schools, groups, and performances – at least until a more precise function is assigned to them, on mining or ironworks sites for instance.

FRANCE
In France, a few miles north of Paris, in Saint-Denis city, Luc Besson is developing the project of a European City of cinema, around the site of a wonderful 1933 thermo-electrical power plant – a prestigious architecture that will be entirely preserved thanks to a project by the Robert & Reichen Agency. In Loos-en-Gohelle (France, Pas-de-Calais) in 1998, the association Common Culture, under the leadership of a dynamic woman, a sociologist, took hold of the salle des pendus (the former miners’ changing-room) at the 11/19 Pit, for the purpose of offering cultural activities to the inhabitants of dozens of towns. The space is now at the disposal of artists for training and creation: some teams are busy bringing back to life the coal mines’ historic heritage, while others are presenting new artistic practices, thus winning official recognition at the national level. 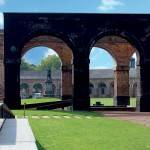 View of the Grand-Hornu esplanade 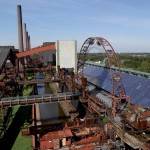 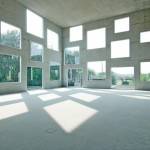 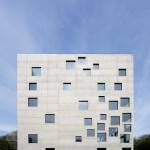 BELGIUM
Not far from there, in Grand-Hornu (Hainaut), a Museum of Contemporary Art was inaugurated in 2002 within the prestigious walls of one of the cradles of early 19th century industrialization in Wallonia. It was intended to make the population sensitive to contemporary art, in the middle of a culturally deprived region, but also to inform others about the new technologies helping arts in progress.

GERMANY
Following the same underground line of coal and of open air landmarks of the iron and steel industry, one meets in Bochum (Ruhr district) the famous Jahrhundert Halle (built on the eve of the 20th century) where, in 2002-2004, the first Ruhr-Triennale took place under the artistic direction of Gérard Mortier – an annual festival dedicated to theatrical, musical and visual arts creation, possibly inspired by the majestic space of that industrial monument. More generally speaking, the whole Ruhr district, namely during the decade of the Internationale Bau Austellung Emscher-Park (1990-1999), seems to have been driven by the motto ‘Kunst statt Kohle’ ‘Art instead of Coal’, as columnist Rosemarie Noack wrote in Die Zeit in 1999, as if large sectors of the population, were eager to catch up on a long history of cultural backwardness. So, for instance, the huge gasometer (116 m high, 67 m in diameter) in Oberhausen and its entirely metallic structure – the biggest of its kind in Europe – has become a place for exhibitions and cultural events such as theatrical shows and concerts. On another scale, in the same period, Zollverein Colliery Shaft XII (later on the World Heritage List) was designated by the City of Essen to become the seat of the North Rhineland-Westphalian Region. In a very similar spirit, the Völklingen Ironworks (Saarland, near Saarbrücken), registered on the World Heritage List in 1994, since 2001 has been re-founded as a cultural centre for exhibitions, various kinds of events, and a museum. Even previous to that new definition, one of the major buildings on the site, the compressors hall with its perfectly preserved blowing engines, had begun since 1991 to welcome symphony concerts or sessions of dance theater. From iron culture to culture factory, art workshops and innovation centre, such are the new themes and ambitions, combined with the respectful memory of the industrial monument. 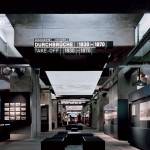 ITALY
One must mention two particularly daring initiatives. In the western periphery of the city of Rome, the historic Montemartini electric power plant, built in a kind of neoclassical style, has become an important museum of classical archaeology after some parts of the sculptures belonging to the collections of the Capitol Museum were moved therein. In Turin, at the Lingotto former FIAT factory, a tremendous variety of re-uses has included two spectacular tributes to the new alliance between derelict industrial buildings and the promotion of art. The first one is the G. and M. Agnelli art gallery, located on the top of the main building: inaugurated in September 2002, it presents twenty-five masterpieces of European painting from their private collection, and also comprises rooms for temporary exhibitions. The other is the large underground auditorium conceived by Renzo Piano, equipped with the most updated technologies, a leading concert hall in Europe. Another example comes from the cinema industry which has also established a connection with derelict industrial sites of large dimensions: in Papigno, close to Terni (Umbria), the film Pinocchio was produced inside the walls of a closed-down important electro-chemicals business.

GREAT BRITAIN
Why not make reference to the Tate Museum in Albert Dock, Liverpool – a glorious British accomplishment from the end of the past century? In fact, the conversion there concerned a famous 19th century port warehouse – not an industrial workplace. Nonetheless, Albert Dock is viewed as a successfully re-adapted monument of industrial architectural heritage. Let us suggest a conclusion – provisional until it is confirmed in the passing of time. Art taking advantage of big empty spaces abandoned by industry does not simply mean local communities taking hold of easy to catch opportunities for meeting their unsatisfied cultural needs, as a sort of a revenge. It also points to an emerging awareness of hidden affinities which link technical feats to artistic creativity, and to the will to use artistic performance and creativity as a tribute paid to the preservation of a meaningful memory of industry, labor and workers.