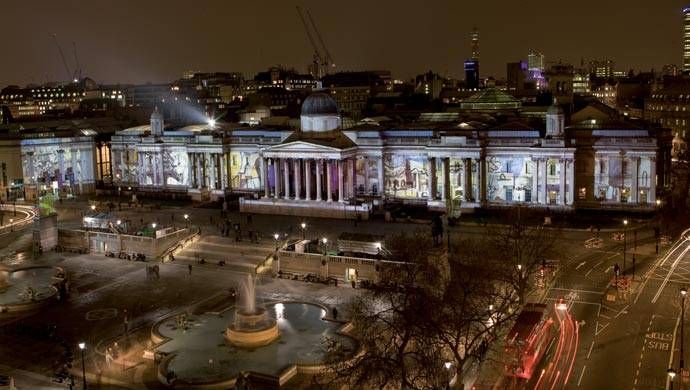 Nowadays it is becoming more and more usual for enterprises to support culture in every form, not only in their cities but also in locations where their business has interests. In the article we analyze how Credit Suisse is promoting the arts in London, New York City and Singapore. 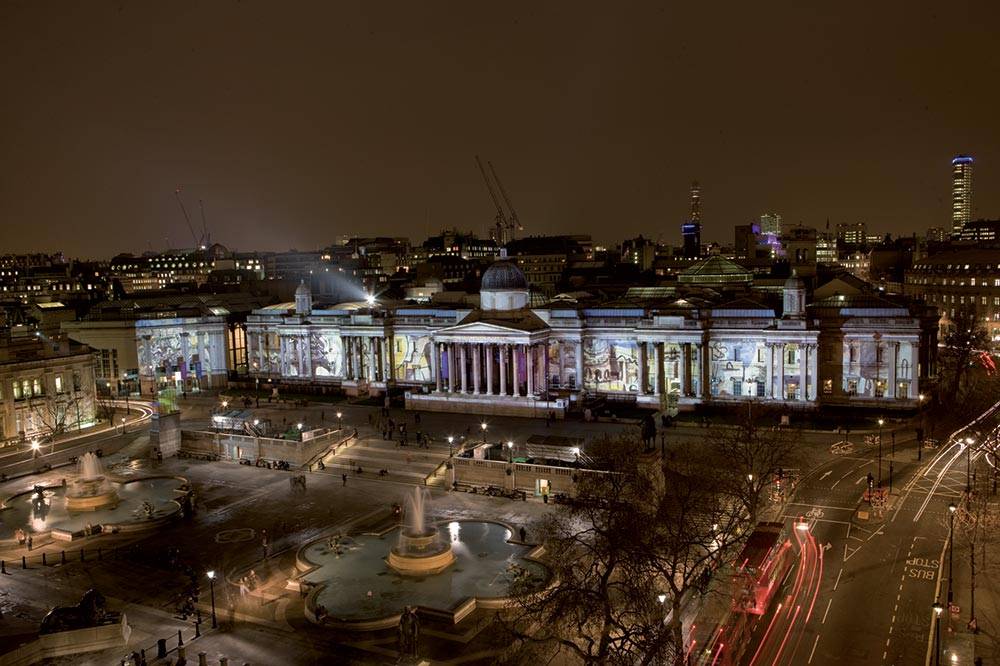 The National Gallery in London is on show 361 days a year, free of charge.

PICASSO IN LONDON
In February 2009, Londoners strolling by the National Gallery Museum at night were surprised to see the façade covered with floor-to-roof Picasso paintings. It wasn’t the last stunt of an eccentric graffiti artist, of course, but a light show set up by the Museum to celebrate its first exhibition dedicated to the Spanish painter. Both the light show and the exhibition were made possible thanks to the collaboration of Credit Suisse, who has been the Gallery’s main partner since 2008. The fact that a Swiss bank stands side to side with one of England’s top museums might appear fairly surprising to some, but not to those aware that CS’s main offices for Europe, Middle-East and Africa are located in London. Toni J. Krein, Head of Corporate Cultural Sponsorship at CS, states that the bank, has taken to heart the idea of “increasing its cultural sponsorship commitments around the globe.”

NEW YORK CITY IN MUSIC
In the Big Apple, CS has recently renewed its partnership with the USA’s oldest symphony orchestra, the New York Philarmonic. Paul Calello, CEO of Cs’s Investment Bank and New York Philharmonic Board Member, said that the goal of the sponsorship is to “sustain the orchestra’s important achievements as an American treasure that is highly regarded around the world” and “as a vital institution in New York City.”

SINGAPORE IN ART
In Singapore, where Cs has its offices, the bank has created a long term partnership and commitment with the Singapore Art Museum. François Monnet, CS’s Head of Private Banking Southeast Asia and Australasia, stated that the Bank whishes to be able “to play a role in helping to stage impressive and exciting shows that will stimulate the cultural environment of Singapore.”

A NEW ATTITUDE
Today, more and more companies are taking important steps to promote culture not only in their native cities and regions, but also in the cities where their business interests are located. Besides providing image-boosting visibility and appreciation, sponsorship tightens the connection with the city, and helps rooting the company in its reality and evolution. Toni J. Krein is convinced that “local investments help to contribute toward the success of the business by strengthening brand recognition, positioning the brand, and cultivating relationships with current and prospective clients. Sponsorship also underlines the importance of corporate responsibility.” Moreover, Krein believes that companies, through partnership with cultural operators, will not only “benefit from the latter’s excellent reputation”, but will also be able “to offer clients access to high-caliber concert performances and exhibitions.” At the same time, this kind of support is essential for culture operators, who face tremendous costs as they strive to constantly increase the quality of their presentations. Award-winning actor Alec Baldwin, host of the New York Philharmonic’s national radio broadcasts, is persuaded thereof, and stated that “to have this kind of corporate underwriting … is so important. Finding corporate underwriting for arts endeavors, that are as substantial as the New York Philharmonic and the mission of the New York Philharmonic, is expensive.” Expensive, indeed, especially since the cultural milieu is always looking to better its events and infrastructures, and to constantly keep culture up to speed with trends and technology. Cultural sponsorship is a great opportunity for companies to gain visibility and appreciation, together with many other advantages. However, it is also a way of giving back to the cities where they are located or in which they work, and of playing a role in their socio-cultural development; moreover, the result of sponsorship will be a richer panorama of cultural highlights, which will in turn generate tourist interest and promote the image of the region. At the end of the day, the process allows companies to ground themselves into the framework of their cities, creating a mutual, symbiotic relationship which will benefit both.

The DNA of the CFO