“When I was a kid, I always wanted to create. I had everything I wanted, but nothing was more fun to me than a pen and a paper to write or draw things and a camera to take pictures.” 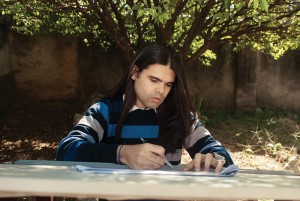 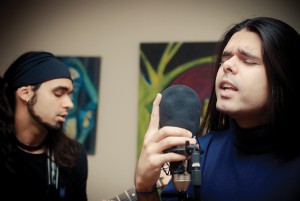 Antonnione owns a studio in Belo Horizonte (Minas Gerais), the third most populous urban agglomeration in Brazil, where he creates graphic designs, environments, technologies for accessibility, and theater set designs. He doesn’t like to describe his workplace as an office. He thinks studio is a better word. “A studio is where you study; you do experiments and develop things,” he points out. In 2011, Leone Ribeiro took part in the Minas Raizes project, an art project of the Minas Gerais University. As a member of the audiovisual team, he provided advice to local craftsmen based on design methods. Among his hobbies are music and theater. “I was a member of an orchestra for ten years, but unfortunately I had to give it up,” he tells us. Now he sings in a rock band whenever he has free time. “It’s fun; during the day I have to wear serious clothes and at night I go to the concert and I become a rockstar.” He uses music to relax. “The best part of my day is when I’m singing. When I sing, I express more. It’s like a spontaneous creation. It’s another character; it comes from my soul,” he explains. At the age of twenty-nine, he has finished three different degree programs–graphic design, visual arts, and social communication–and a master’s degree in Design, Innovation, and Sustainability. But he would like to continue studying. From Kosher to Veganism