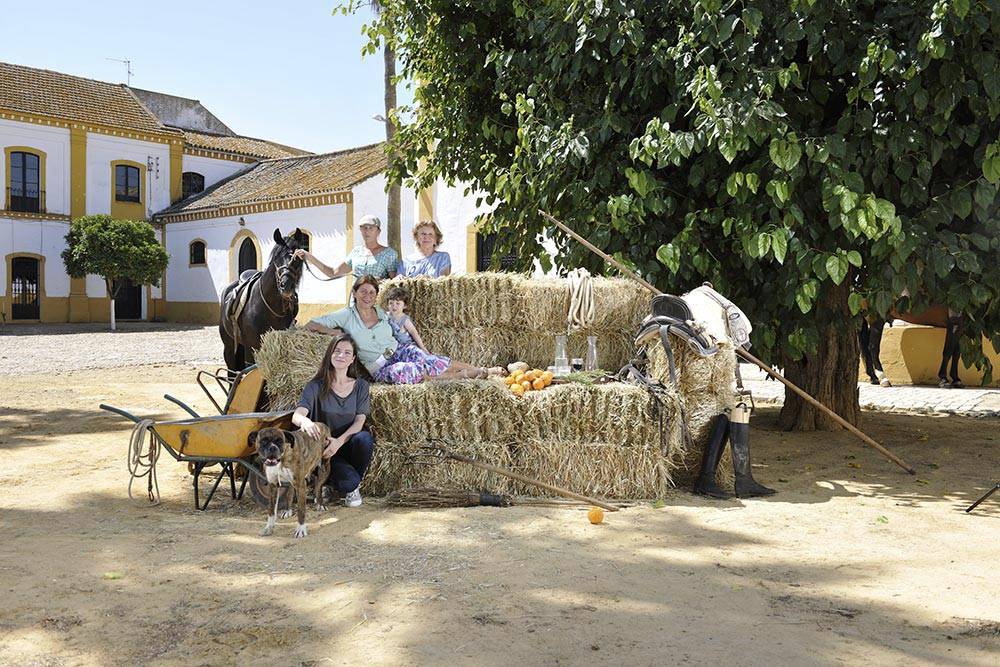 The horses line created by the legendary Francisco (Paco) Lazo Díaz is now developed by his daughter Macarena.

Macarena Lazo has a very difficult task: preserving the level and the reputation of one of the most renowned breeding farms in Spain. Founded by her grandfather Francisco Lazo Orta in 1936 (he died in Madrid in 1939 during the first days of the Civil War), the breeding farm was expanded by her father who decided in 1966 to add PRE horses to goats, sheep and cows.

Foals and broodmares in the fields

Firs steps
The first broodmares were bought from Montepalacio di Carmona breeding farm (today dismissed) belonging to current Baron of Montepalacio, Fernando del Río y Medina and from the De la Escalera farm in Fuentes de Andalucía. Paco Lazo is remembered as an exceptional man by his collaborators. For Miguel Almonte Pérez (in this house since 1989) “he had the ability to involve us, to explain us things in a clear, humble and captivating way”. For Manuel Padlos, who has been working here in the past 56 years, mainly being involved in the agricultural activities, Lazo was “an outstanding example of kindness, and one could perceive that he believed in what he was doing. For this reason too, he was so successful as a breeder in Spain and abroad”.

The women of the house
The charming Macarena has managed the farm since 1999, when her father passed away. She lives between Seville and the farm with her mother and her sister Maria Teresa Lazo Villar (Tere is an excellent rider who “likes riding almost every day both on the track and in the countryside of the vast property” of more than 500 hectares, which is located in Pilar, 50 km North West from Seville). The future generations are already willing to take the scene. Macarena’s daughter María Fajardo Lazo likes horses and her granddaughter Martina Benjumea Fajardo, 2 years old, seems to be intrigued by the excitement experienced in the house when speaking about horses. The environment of the finca is similar to a five stars hotel, the cuisine worthy of a Michelin star, the atmosphere is welcoming and relaxed. Leaving the place after lunch and a pleasant conversation was hard.

The horses
In 1979, Paco Lazo decided to make a big change in the breeding farm by purchasing Poseidon V, a brown Carthusian line horse, characterized by a white “careto” on his face. The animal successfully accomplished his task, making the face of the horses of the farm gentler, making them more elegant in the movements as well. Poseidon V made the Lazo more prestigious, so that also other breeders have used the offspring of this champion. The great rejoneador Javier Buondía used to ride a horse of Lazo, named Dadimoso, a true artist. Favorito XXX, son of Poseidon V, made history at Sicab in 1994, winning everything that could be possibly won. It happens very rarely that one only exemplar wins so many prizes. The Lazo line has given to Yeguada Militar the great champion Albero II, used by many breeders as a stallion, and to the Yeguada María Fernanda de la Escalera, Ganador VIII, whose son Ermitano II is one of the most important horses in Spain. Still nowadays the foals – about 20 horses are given birth every year – “resemble Poseidon V”. Either subtly or in a more evident way, each specimen carries a white sign on their face, a “light” that to the most well-informed makes, the genetic quality offered to the market by this breeding farm of about 100 animals, very clear.

The buildings
A typical and magnificent Andalusian farm, built starting from mid 18th century, dedicated to agriculture and breeding. Its peculiarity is the tower, dating back to 1100, still intact and of great cultural interest, situated in front of the entrance. The spaces are extremely fascinating, the materials, the forms and the finishing are precious and perfectly employed according to their function. The theory of the artistic movement Bauhaus affirmed that the destination of use of an object or building is fundamental, so that the quality of an object is to be valued according to its capacity to carry out a specific task or function. These buildings are functional, as much as the Bauhaus instalments, with a plus: the style note of the decorations and the combination of stones, wood and metals.